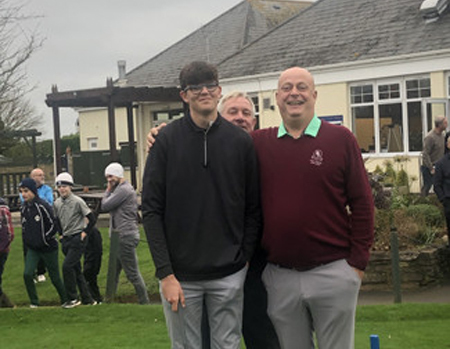 Adam raised more than £800 as part of his golf Captain's drive-in. In January 2020 Adam became the Junior Captain at Churston Golf Club for the year. As part of this, he was able to nominate a charity for the Club to support. Very happily for us, he nominated the Marfan Trust.

The first fundraiser he did was a drive-in where he tee’d off on the 1st tee and people had to guess where the ball was going to land, while at the same time donating to his nominated charity, the Marfan Trust. He also held a cake stall on the day to raise extra funds. He plans to raise more funds going forward. Thanks so much Adam.

Adam had a lensectomy in both eyes when he was 7 years old and a detached retina at 13 years old. Now 16, he has been playing golf since he was 6 in spite of these health issues with further surgery scheduled. We wish him lots of luck for this and indeed every success in his golf going forward. We would also very much like to thank Adam’s Mum, Nicola, for her unwavering support over the years, which has included providing us with Beverley Holidays' prizes to auction off at our various events.