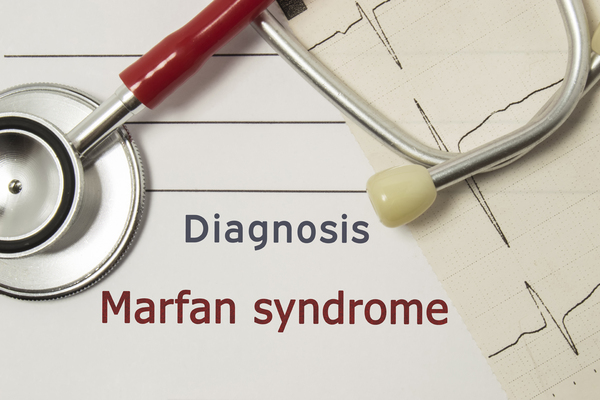 What is Marfan Syndrome?

Traditionally Marfan syndrome is a clinical diagnosis based on physical examination, personal and family medical history. Twenty five percent of patients are the first one affected in the family. The condition is dominantly inherited directly from parent to child, with a 50-50 chance for each offspring of an affected person, that the child may inherit Marfan syndrome. There is great variability of expression both within the family and between families who have Marfan syndrome.  It affects both sexes and has an incidence of approximately one in 3300 population so cannot be classified as rare, but may be called unusual.  It has been reported in every race.

At present, molecular genetic study of the gene for Fibrillin-1 demonstrates errors (mutations) in 98% of those affected with Marfan syndrome. It is the best diagnostic tool. This tiny error is present in every cell in the body and helps to direct development from the moment of conception. Over 3000 errors have been reported and their type and location within the very long 65 exon gene helps to determine the severity of the condition. Most mutations are unique, so each patient is unique. The end result is similar because the elastic protein Fibrilin-1 is deficient throughout the body giving rise to problems in the eye, heart, skeleton and other systems.

The modified Ghent diagnostic criteria published in 2010 require that two out of three major systems must be severely affected – this includes the eye, the heart and the skeleton. The classical involvement in the eye is dislocated lens due to the absence of the zonular filaments which normally hold the lens in place. In the heart, aortic dilatation or dissection, usually commencing in the ascending aorta, is classical. In the skeletal system, only one major feature is accepted as a severe manifestation of Marfan syndrome, namely scoliosis or spinal curvature requiring surgical correction. In addition many minor features are listed which do overlap with the normal population and therefore a score of at least seven is required, called the systemic score.

A flow diagram has been created to guide the clinician through the diagnostic pathway. If there is a family history of Marfan syndrome, then the patient only needs one system involved classically to make a diagnosis, and of course this should be confirmed by finding the family Fibrillin-1 mutation in the blood sample. If there is no family history, then the clinician must work through all three major systems as well as requiring a Fibrillin-1 mutation in order to make a positive diagnosis.

Over the last 30 years, worldwide research in Marfan Syndrome has greatly improved our diagnostic ability and our ability to treat the condition. Discovery of new genes for overlapping syndromes such as isolated dislocated lens, familial scoliosis occurring alone, and now genes which can create ascending aortic aneurysm confirms that these overlapping conditions are all separate genetic entities from Marfan syndrome.

Conclusion
Marfan syndrome is therefore still a clinical diagnosis based on major involvement in two out of three systems plus a family history plus a Fibrillin-1 mutation. If no mutation is found, then a screening panel of other genes causing aortic aneurysm, ectopia lentis, scoliosis or whatever the major manifestation is in a particular patient, should be requested by the geneticist or cardiologist. In this way, correct management at the optimum time can be offered to patients who truly have Marfan Syndrome. In addition, the family mutation can be used to ensure that the next generation do not inherit the genes or have Marfan Syndrome, through prenatal or preimplantation genetic diagnosis.