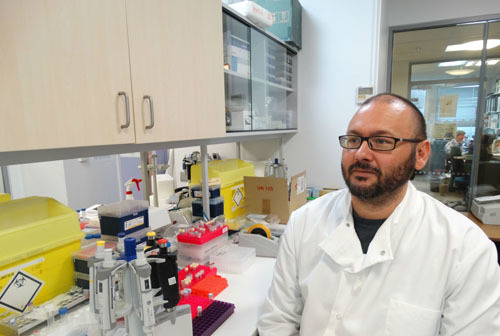 Dr José Aragon-Martin (BSc (Hons), PhD is a Research Associate and was appointed Director of the Sonalee Laboratory (part of the Marfan Trust Research Group) in 2012.

Born in Madrid, Spain, José obtained his BSc (Hons) in biochemistry from the University of Greenwich in 2001 and joined the Department of Cardiac & Vascular Sciences (CVS) at St George’s University of London in 2003. José worked collaboratively between CVS and the Department of Surgery, at the University of Connecticut Health Center as a PhD student, obtaining his PhD in 2009. After 16 years of a long collaborative and productive relationship, he moved with the Marfan Trust to the National Heart and Lung Institute (NHLI) in the Faculty of Medicine at Imperial College, based at the Guy Scadding Building  in October 2019.

José has made an invaluable contribution to the understanding and treatment of Marfan syndrome through original work. This includes mapping the Marfan syndrome gene, developing genotype–phenotype guidelines to help predict how children with Marfan syndrome will be affected in their adult life. He is also the curator of a large FBN1 mutation database.

Until recently, José was also an inspired teacher, lecturer, and mentor within St George’s University of London delivering lectures in both the biomedical science BSc and MSc courses, assessing exam questions, and examining projects and vivas. CBL and PBL tutor for MBBS students, and SBL tutor in second year biomedical student groups have also added to his experience.

José is happiest when teaching technical skills to students who will become future molecular geneticists, a mushrooming field. He is competent in laboratory techniques of linkage, Sanger sequencing, genotyping, and exome sequencing ION Torrent and ILLUMINA. He performs full variant analysis daily and has won certificates in exome sequencing.

His wide range of experience of finding new causative genes is reflected in his 15 publications regarding genes for glaucoma, ectopia lentis, Marfan syndrome, familial thoracic aortic aneurysm (FTAAD), and the use of Fibrillin–1 mutations in prenatal and preimplantation genetic diagnosis for couples where one or both partners have Marfan syndrome.

Current and future work planned includes utilising available pedigrees in the Sonalee Laboratory’s large database, to find new genes for ectopia lentis, FTAAD, idiopathic scoliosis and Ehlers Danlos III (joint hypermobility syndrome). Continued analysis of the position and type of FBN1 mutation, and its influence on phenotype has taken him into the field of fine gene mapping. Discovery of modifying genes, which may improve the disease outlook in Marfan syndrome families with variable expressivity, along with fine gene mapping, may lead to improved gene therapy in the future.