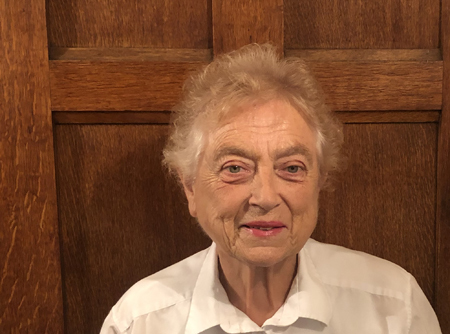 Dr Anne Child MD FRCP is the Medical Director of the Marfan Trust.  She graduated in Medicine from the University of Toronto. Specialising in paediatrics, Dr Child studied in Vancouver, New York and San Francisco. A growing interest in prevention of disease through genetic counselling and early diagnosis led her to specialise in clinical genetics, firstly in Montreal (McGill University), then at the Institute of Child Health, Hospital for Sick Children, London. Counselling experience and an interest in Marfan syndrome were gained in the Paediatric Research Unit at Guy’s Hospital, and entry into the field of Marfan syndrome research commenced. Co-discovery of the Marfan syndrome gene in 1991, led to Dr Child’s major interest in diagnosis and management of Marfan syndrome and related disorders.

Dr Child is leading a team of laboratory staff involved in basic research into the genetic cause of and best treatment for Marfan syndrome. Dr Child is the author of over 150 peer reviewed articles and invited contributions. Her wide-ranging literature written for different specialities involved in the care of Marfan syndrome patients has been distributed to these specialities throughout the UK, and indeed worldwide. This work has also been translated into most major international and European languages and made available through the chain of Marfan syndrome support groups (IFMSO)  which Dr Child has helped to establish.

The research programme relocated to Brompton Hospital/Imperial college in 2019, and after amalgamation with the Marfan Association, patient support is now extended into social media. Research into genetic causes of aortic aneurysm and overlapping syndromes remains the main activity.

Subscribe Sign up to receive news by email
Donate Support research into Marfan Syndrome
Join now Become a member
The Marfan Trust is registered in England and Wales under charity number 328070 at Guy Scadding Building, Dovehouse Street, London SW3 6LY. Contact us at [email protected] or by phone on + 44 (0)20 7594 1605
Log in | Powered by White Fuse