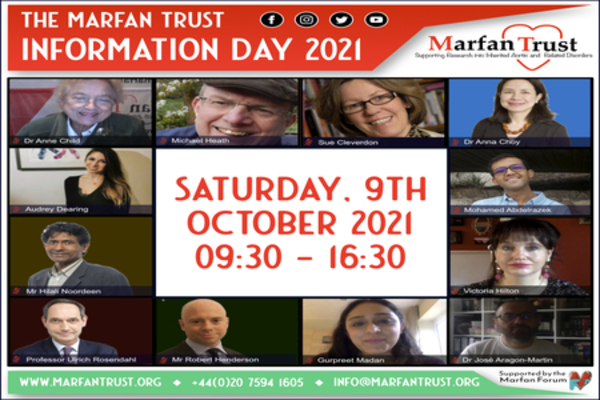 A virtual one-day conference for folk with, or affected by, Marfan Syndrome, as well as interested physicians, has been planned for Saturday 9th October 2021, 9.30 am to 16.30 pm.

“It was a first-class line-up with great use of technology and excellent time management” (a supporter talking of our 2020 conference, our most highly attended event ever held).

Updates on aortic surgery, children’s eyes, scoliosis management, psychological support and prenatal genetic diagnosis are planned. Student research projects will be reported, followed by an update on Marfan Trust activities including helpline and fundraising. Opportunities for breakout chat rooms and questions of the speakers have been built into the programme.

If you are interested please scroll down to see the conference programme, speaker bio's and to purchase your tickets.

All you need to take part, is a smartphone, tablet, or PC, as well as an internet connection.

14.30 – 14.45 Is a Slim Build a Protective Factor in the COVID-19 Pandemic? Mohamed Abdelrazek and Thomas Whittaker, Medical Students of Cardiff University

Mr Rosendahl is one of the world’s leading cardiac surgeons with significant technical and clinical experience in advanced complex cardiac surgery.

He was appointed consultant cardiac surgeon at Royal Brompton Hospital in 2012. Prior to that he worked at the Heart Institute in Baden, Germany, and the Texas Heart Institute.

Mr Henderson has an expertise in both surgical and genetic paediatric retinal disease. He is one of only three dedicated paediatric vitreoretinal surgeons in the country and his expertise includes the management of FEVR, Coats disease, Incontinentia Pigmenti and Retinopathy of Prematurity as well as complex retinal detachments.

He is also a paediatric ophthalmologist and provides opinions for inherited retinal dystrophies; he operates on complex cataract including trauma and uveitis related complications.

He is appointed jointly between Great Ormond Street Hospital and Moorfields Eye Hospital.

Mr Noordeen was appointed as a consultant Orthopaedic and spinal surgeon at The Royal National Orthopaedic Hospital and Great Ormond Street Children’s Hospital in 1995, as well as the Hospital for Neurology and Neurosurgery, Queen Square.

He did his undergraduate training at The University of Oxford, where he was the President of the Oxford Union in 1983.

He is a Professor in spinal surgery, KUM, National University of Malaysia, and visiting professor University of Columbia, Missouri, USA.

He was awarded the Gold Medal for the FRCS (Orth) exam.

Ian Has worked in intensive care since 2010 and currently holds the position of Lecturer Practitioner for intensive care nursing across the Royal Brompton Hospital and University of West London.

Ian has an extensive critical care clinical and teaching background working in cardiorespiratory intensive care, working within the regional ECMO service. He has a particular interests in the care of Severe Acute Pulmonary Failure, working to better the outcome of these patients through nursing and medical interventions. Ian has studied in the areas of patient and family centred care and involvement, working towards optimising this within his clinical practice role.

Ian currently is the representative from BACCN for EfCCNa – European Federation of Critical care Nurse Associations and a regional advisor on the BACCN board.