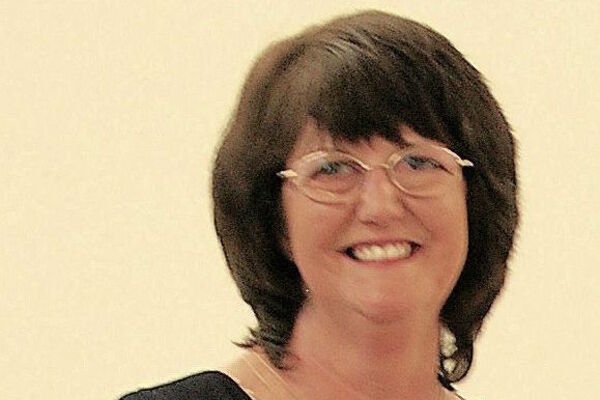 An avid reader from the age of 3 despite dislocated lenses, Sue didn’t let MFS stand in her way ...
8 Dec 2022

Never was there another so caring and bright. Wise mentor to her fellow Marfan folk and enthusiastic participant in Marfan research, Sue Beer contributed so indelibly to the Marfan community. Much beloved and very loving, Sue and her legacy continue through her son Nick, and little grandson, Ronnie.

Sue, by her sister Margaret

Sue (born in 1949) was 3 years older than me. She was the clever, sensible big sister who took this responsibility, indeed all responsibility very seriously. A memory that she has never allowed me to forget was when I first started school, her school, Rice Lane, in Liverpool: Sue had just moved up to the Juniors and to my dismay I found that my classroom was in a separate building, in the Infants Department, and that even at playtime her playground was separated from mine… and by big iron railings! I’m told that I would stand there forlornly every morning playtime and cry until (reluctantly) she would abandon her friends to come and… hold my hand through the bars… In truth, she has been holding my hand ever since!

Sue was a very bright child. Despite the lenses on her eyes being dislocated, therefore making focussing really difficult, she had actually learned to read independently at the age of 3, beginning at that early age what was to become her lifelong love of reading. Her lenses were eventually removed at around the age of  4. Yet no one knew then or indeed throughout her adolescence and until she was as in her thirties, that she had Marfan syndrome. There was no knowledge or understanding of this condition amongst us as a family, her friends or her future employers.

Sue's heavy and very cumbersome glasses first bought 70 years ago, were hugely valued by her (in fact throughout her life she kept every pair that she had ever owned!) I remember how as a child she became adept at quickly adjusting them on her nose to facilitate whatever task she was attempting. Sadly as a teenager when looks assumed importance, Sue’s hefty frames with thick lenses did trouble her, making her feel very self conscious, unattractive but of course with maturity she overcame this or at least accepted it.

Sue was a very quick learner. She was conscientious and really enjoyed learning and academic work. Sue chose not to go to university, instead, after A levels, joining NatWest Bank in Liverpool and eventually moving to work at the bank’s head office in London where she made lifelong friends and bought her first home.

Sue met Don in London and they fell in love. They married in Liverpool, and in 1983 produced their much-loved, only child, Nicholas. It was then that both Sue and Nicholas were diagnosed with Marfan syndrome. It came as a great shock to find that not only did her baby have a syndrome of which we had never heard but that she had it too.

Sue first met geneticist Dr Anne Child whose explanations were so helpful, and both she and Don became very involved with the Marfan Association. Supported by geneticist Anne Child, Sue researched the condition thoroughly. She determined to keep herself informed of any new developments with regard to Marfan and to seek the very best care for Nick as he grew up…and as time went on, also for her grandson, Ronnie. Sue volunteered her help in many ways for the Marfan Association (now merged with the Marfan Trust). Always appreciating the importance of medical research, she willingly participated in the Marfan Trust’s continuing research programme. Don Beer was to become the Marfan Trust Chairman.

Sue was always willing to share her experience and understanding of Marfan and readily joined the Trust’s support days for patients. Her friend Val Greatorex, who also has this syndrome said, “I have never known anyone like Sue and I doubt I’ll meet anyone like her again.” She said that Sue was so experienced in managing and coping with her own symptoms and was so knowledgeable about Marfan generally, that she was the ideal person to speak to anyone newly diagnosed with the syndrome. Although Sue’s own health had been in decline for some years, this never broke her amazing spirit or her sheer determination to get well as quickly as possible and to lead a normal life.

In hospital, even in ITU and sometimes barely conscious following lengthy operations, Sue was hugely courageous, always polite, always obliging, keen to never seek attention, to never make a fuss. And afterwards when returning home, she would play down ongoing, (frequently severe) pain and debilitating issues, greeting visitors or people who phoned with genuine delight and interest in their lives, in their health.

I rather think that in time she will not be remembered by anyone for her suffering but for the pleasure and helpful support she continually gave to all. Caring wife, mother, grandmother, in-law, godmother, cousin, aunt, great aunt, niece, sister, friend, Sue took keen interest in us all. Her greatest joy that I recall was when Nicholas and her much-loved daughter-in-law Rose produced Ronnie, her grandson. Sue so loved this little boy and delighted in spending time with him, Fortunately, now aged 5, it’s very likely that Ronnie’s happy memories of her are now permanently fixed, and will never be forgotten. As her lovely, treasured friend Zandra once whispered at Sue’s bedside in hospital, her life again hanging by a thread, “You simply must get well, Sue……Whatever would we all do without you?” She will be so missed.